Fifty-eight miles of track were laid from the Menominee River to Champion, Mich., in 1887. From then until January of 1893, Champion was the northern terminus of the main line. After the line to Ontonagon was completed in 1893, the section from Channing to Ontonagon became the main line. The section from Channing to Champion then became the Champion Branch.

The Escanaba & Lake Superior (E&LS or ELS) uses the line from Channing to the Michigamme River (between Floodwood and Witch Lake) for car storage. The section between the Michigamme River and Republic still has rails, according to satellite imagery, but it is quite overgrown and some grade crossings have been removed. The rails between Republic and Champion have been removed and that section is now the Republic/Champion Grade Trail.

Channing (originally Ford Siding), Mich., was Milepost 232 on the M&N. 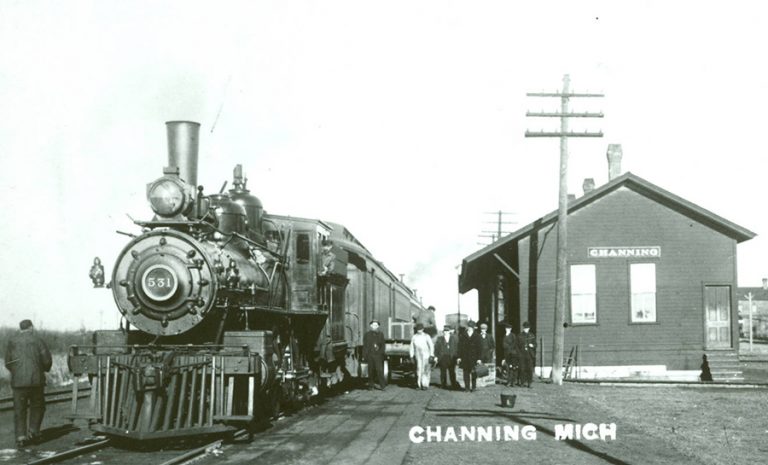 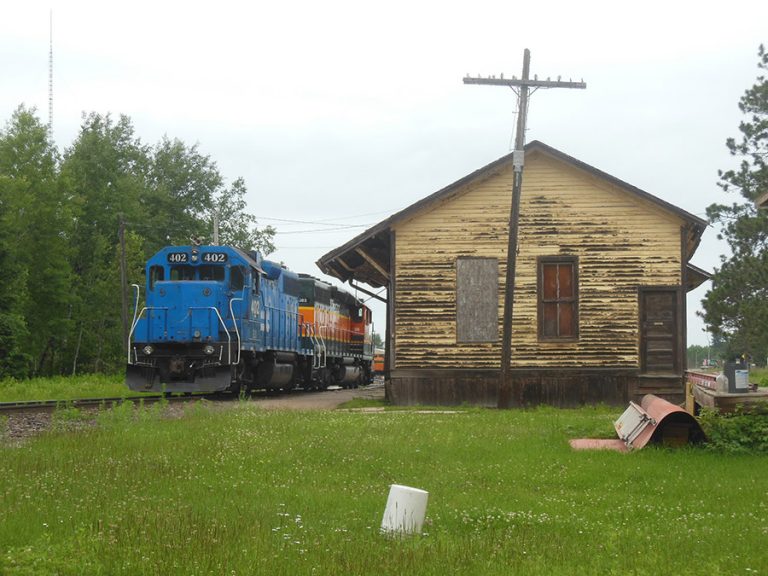 ELS 503 and ELS 402 rest in front of the former M&N depot at the E&LS yard at Channing, Mich., on 26 June 2021. I believe this to be the 1893 M&N depot, with the newer, larger MILW depot hiding beyond it. I haven’t found much information regarding the two depots here. One reference states the older depot was built in 1888, but that is almost certainly erroneous. In 1892, when the name was changed from Ford Siding to Channing, the depot was an old box car, as J. Parke Channing (the namesake of this community) later recalled. A newspaper article from 27 July 1893 proudly proclaimed that “a new and neat depot has just been completed.” The newer, larger depot was built by the MILW later, in or prior to 1907, the earliest photograph I have seen. This view is looking northward. Photograph by Tom Bruss.

Looking northwest toward the MILW/Soo Line (SOO) union depot at Champion, Mich., on 28 March 1970, three days before the agency was scheduled to be closed. This is the MILW side. Photograph courtesy of the Michigan Technological University Archives and Copper Country Historical Collections. 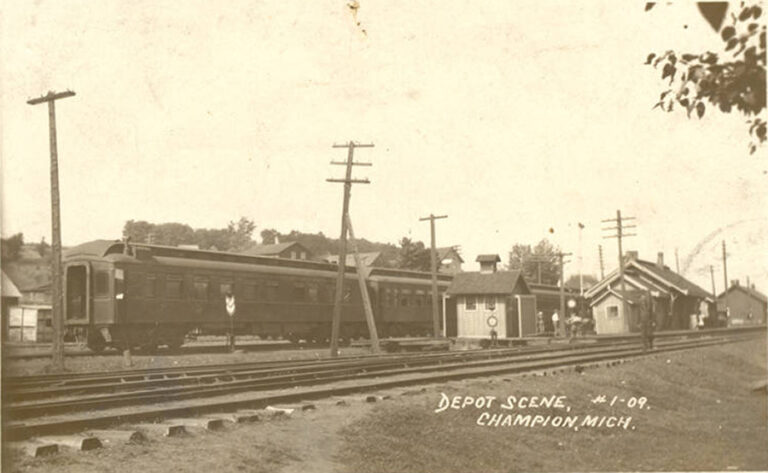 Looking west toward the MILW/Duluth, South Shore & Atlantic (DSS&A) union depot at Champion, Mich., ca. 1909. The train rests on the MILW rails, the rails in the foreground belong to the DSS&A. The former DSS&A depot is partially visible at the far right. Photograph courtesy of the Houghton Co. Historical Society and Upper Peninsula Regional Digitization Center.

This depot was built by the M&N in 1887, when they reached Champion. The Duluth, South Shore & Atlantic (DSS&A), through a predecessor, the Marquette & Ontonagon (M&O), had reached Champion in 1865. At some point between 1892 and 1902 (according to the Sanborn maps), the newer M&N depot was converted to a union depot to serve the passengers of both railroads. The older DSS&A depot was converted to a union freight house for use by both railroads. According to an article in the Spring 1993 issue of The Soo, the former M&N depot was sold to the highest bidder in 1975. It was dismantled and the lumber was used to frame a house in nearby Clarksburg. The fate of the former M&O/DSS&A depot is unknown to us. 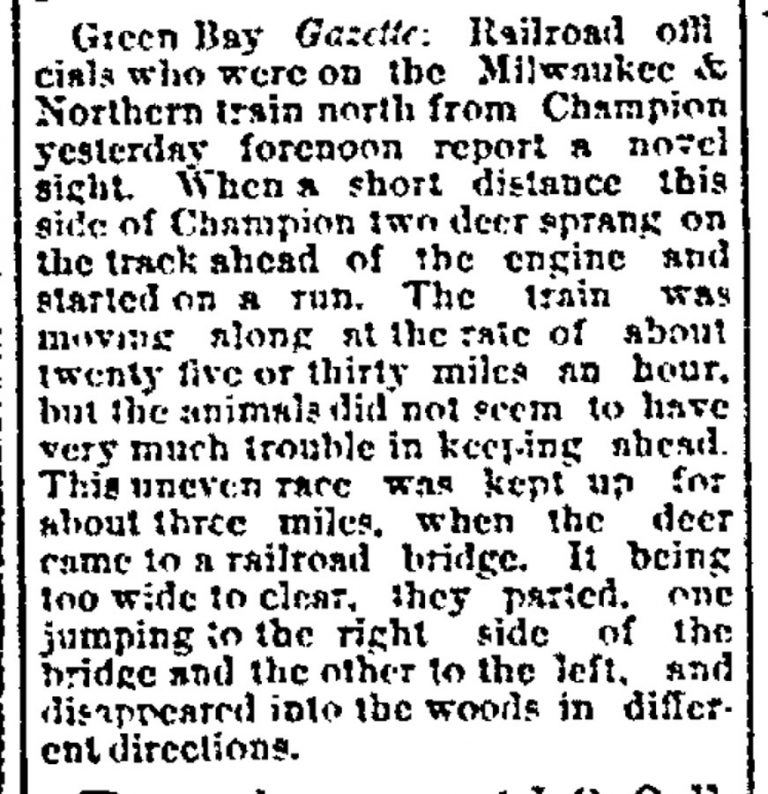 Daily Northwestern article on 1 March 1888, about two deer running on the tracks in front of a M&N train near Champion, Mich., on 29 February 1888.

The copy of the newspaper article, at left, is not very good, so here is a transcript of it:

“Green Bay Gazette: Railroad officials who were on the Milwaukee & Northern train north from Champion yesterday forenoon report a novel sight. When a short distance this side of Champion two deer sprang on the track ahead of the engine and started on a run. The train was moving along at a rate of about twenty five or thirty miles an hour, but the animals did not seem to have very much trouble in keeping ahead. This uneven race was kept up for about three miles, when the deer came to a railroad bridge. It being too wide to clear, they parted, one jumping to the right side of the bridge and the other to the left, and disappeared into the woods in different directions.”