The M&N constructed a 4.7-mile branch line from Menasha down into ‘the Flats’ at Appleton, Wis., in 1880 (the Appleton Branch). By the mid-1880s, the Menasha, Appleton and Neenah Branches were collectively referred to as the Appleton Branch on timetables.

Swing Bridge Over the Fox River at Appleton, Wis.

In 1995, Larry Easton, co-founder of the MNRHS, wrote an article about the MILW swing bridge on the former M&N Appleton Branch. The article was illustrated with Larry’s own photographs, which he had captured on 27 July and 2 August 1966. The Neenah Historical Society has a photocopy of the article, and gave us permission to use it here. We would love to learn the whereabouts of Larry’s original photographs, in the hope that we can obtain better copies of them. 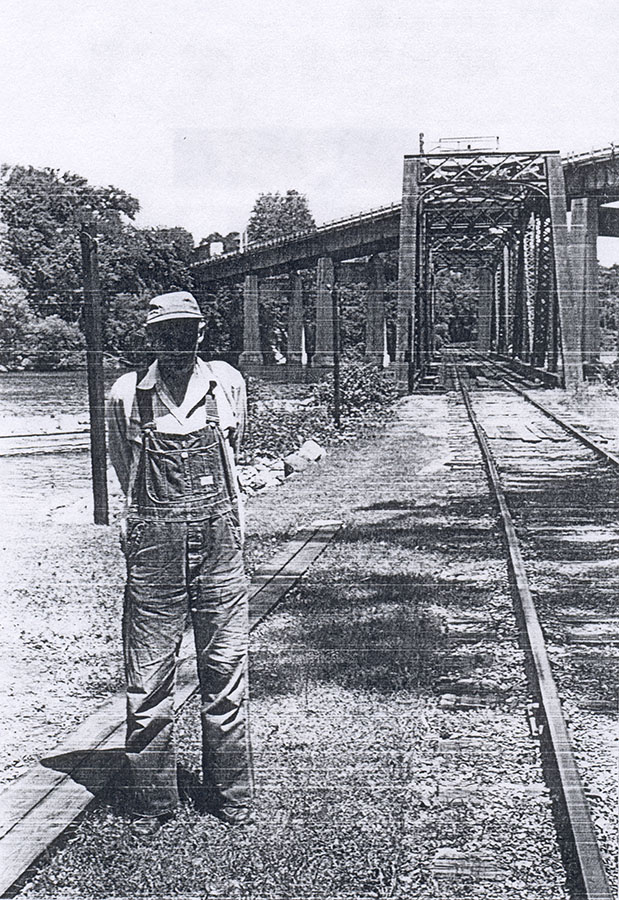 “Herman Erdman was the bridge tender when Larry Easton had the opportunity to stop in for a visit on August 2, 1966.” Photograph and caption by Larry Easton, courtesy of Neenah Historical Society.

“On July 12, 1879, the Menasha & Appleton Railroad [controlled by the M&N] was incorporated to build a branch line between the two towns of Menasha and Appleton. Construction began in the fall of 1879 and was completed in March 1880.

“The new railroad was immediately leased to the Wisconsin Central. The M. & A. R. R. was sold to the Milwaukee & Northern R. R. on July 10, 1880, with both railroads remaining under the control of the WC until July 31, 1882, when the leases were terminated. The Milwaukee & Northern operated as an independent railroad until June 26, 1893 when the entire railroad was sold to the Chicago, Milwaukee & St. Paul Railroad. The “Appleton Branch” remained Milwaukee Road property until the sale to the Soo Line in 1985. A portion of the line is still operated by the new Wisconsin Central, Ltd. railroad, but it has been several years since the last train rolled across the bridge into the “flats” in Appleton.

“I stumbled upon the bridge during the summer of 1966 when I was working in Appleton at the Allis-Chalmers plant in the flats. Since I had an hour for lunch, I would sometimes take my camera and photograph interesting buildings and trackwork when the weather was cooperative. I had often seen the bridge; and for a while I couldn’t find any easy way to get down to it. I finally stopped in the little park at the top of the hill and, much to my delight, found a long stairway leading down t the bridge tender’s cottage below. It was an easy climb down to the tracks. I was pleasantly surprised by the neatly kept buildings and surroundings.

“As I was soaking up the quiet and peaceful atmosphere (compared to the traffic above), the bridge tender, Herman Erdman, came out of the cottage to greet me. We had a short visit. Unfortunately, I didn’t take any notes, not thinking that sometime in the future I would want them for an article!

“I took the accompanying photos, and hurried back to work. Although I had planned to get back down to visit the bridge again, I never did. Now, I don’t want to. I would rather remember that pleasant day in 1966 – the way is used to be.” 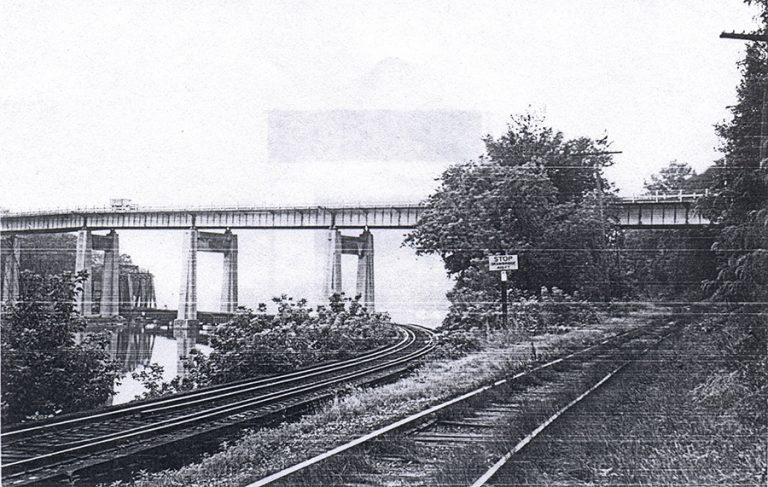 “The Milwaukee Road tracks curve gracefully under the Memorial Drive bridge before reaching the swing bridge on the south side of the Fox River in Appleton. July 27, 1966.” Photograph and caption by Larry Easton, courtesy of Neenah Historical Society. 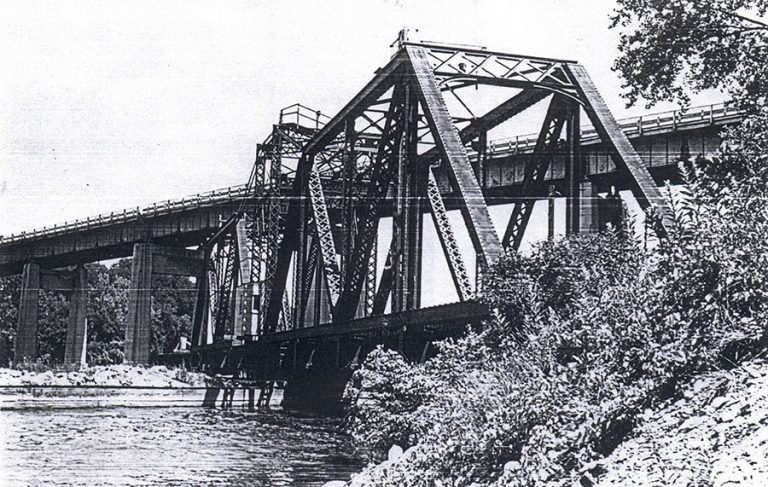 “Looking north form the south bank of the Fox River, the Milwaukee Road swing bridge is an imposing structure. With very little boat traffic on the river, the bridge tender had little to do other than visit with an occasional railfan or neighborhood kids. August 2, 1966.” Photograph and caption by Larry Easton, courtesy of Neenah Historical Society. 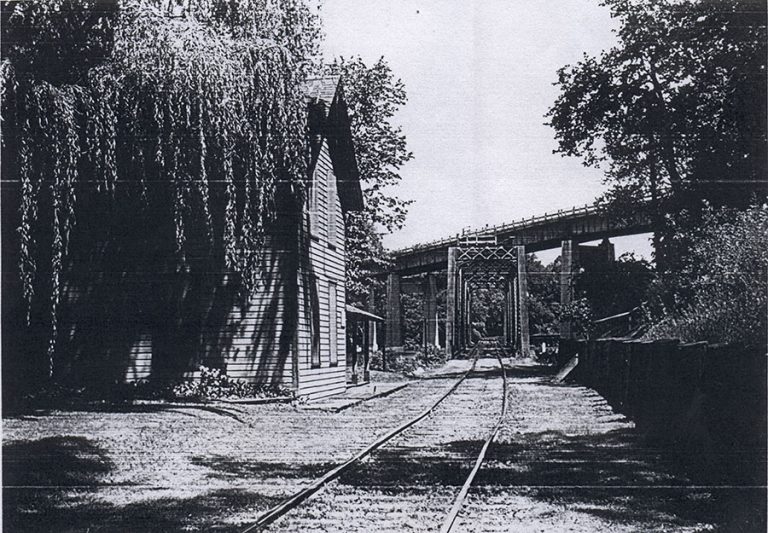 “The bridge tender’s cottage was located between the railroad tracks and the river, making for a very scenic and secluded spot. A stairway to the park above was the only access.” Photograph and caption by Larry Easton, courtesy of Neenah Historical Society. 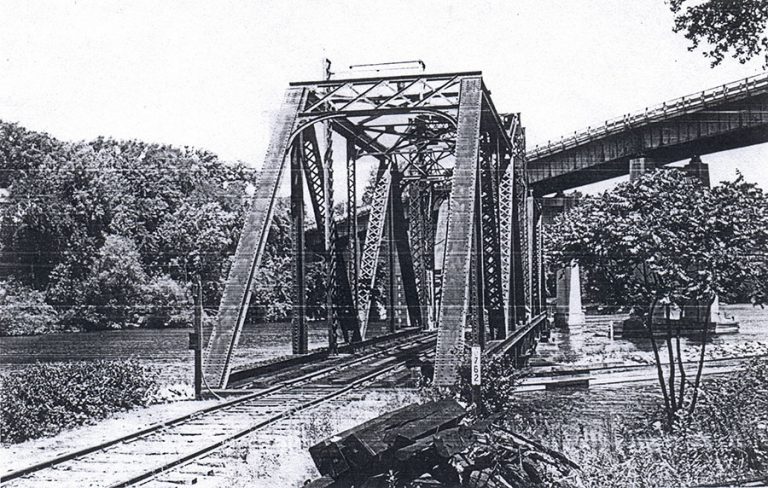 “The bridge was always locked in place for rail traffic and only opened when a boat signaled for passage. By 1966 river traffic was mostly pleasure craft. August 2, 1966.” Photograph and caption by Larry Easton, courtesy of Neenah Historical Society.

The circa 1880 M&N depot in ‘the Flats’ at Appleton, Wis., photographed circa the 1960s. This view is looking northeast from Oneida St. (originally Lake St., now Olde Oneida St.). Photograph by Larry Easton, co-founder of the MNRHS. 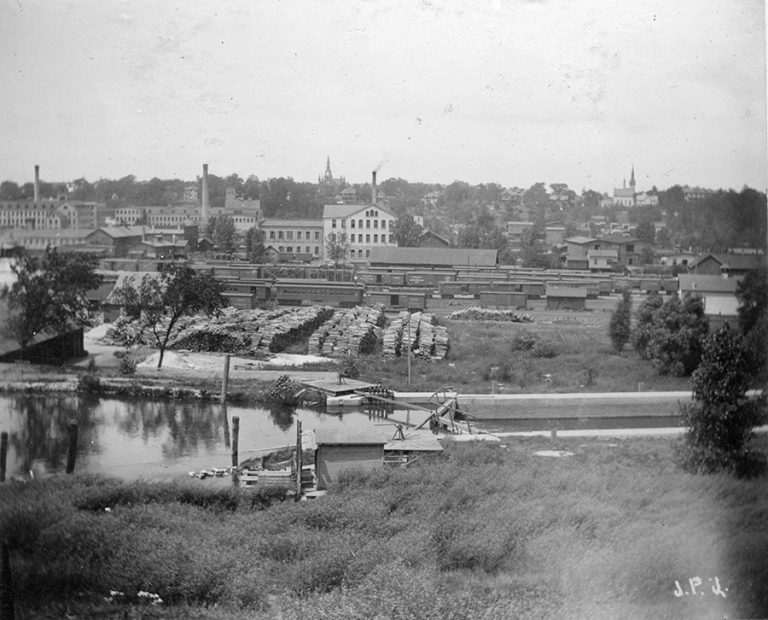 The Milwaukee Road (MILW), former M&N, yard in ‘the Flats’ at Appleton, Wis., circa 1898. The Chicago & North Western (C&NW), former Milwaukee, Lake Shore & Western (MLS&W), yard runs parallel along the far side the MILW yard. This view is looking north from E. South River St. The large, cream-colored brick building near the center of the scene is the Appleton Woolen Mills. Appleton Lock No. 2 (historically Lock No. 16, counting from Green Bay) on the Fox River Navigation Canal is in the foreground. Photograph courtesy of Neenah Historical Society. 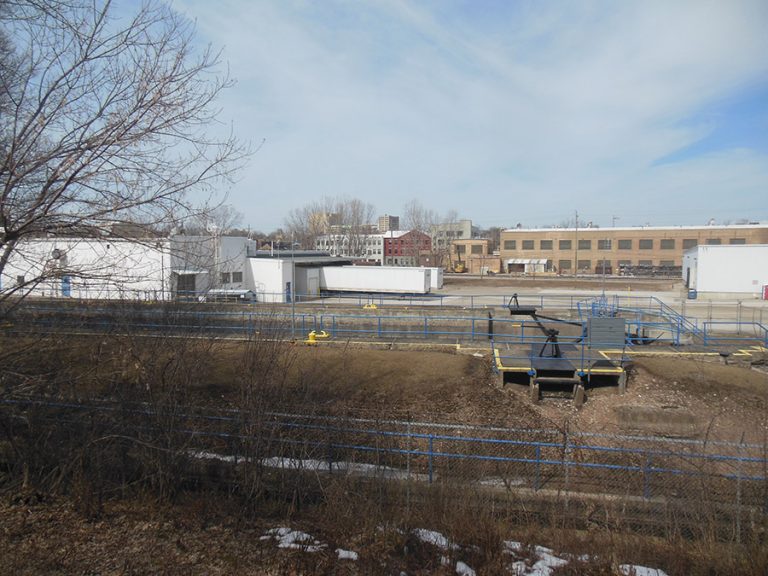 The former site of the Milwaukee Road (MILW), former M&N, and Chicago & North Western (C&NW), former Milwaukee, Lake Shore & Western (MLS&W), yards in ‘the Flats’ at Appleton, Wis., on 21 March 2021. I was attempting to replicate the same view as the historic photograph to the left. A clump of trees on E. South River St. prohibited the exact perspective. This view, captured from the Newberry Trail, originally Canal St., is pretty close. There are only two things visible in the 2021 photograph which existed in the historic photograph: the Appleton Woolen Mill, whose beautiful cream-colored bricks have been spoiled with a coat of gaudy maroon paint; and Appleton Lock No. 2 (historically Lock No. 16, counting from Green Bay) on the Fox River Navigation Canal. The cream-colored brick facility in the background to the right is currently home to JWM Coenen Mechanical (historically Allis-Chalmers, originally Valley Iron Works). The two white, metal-clad buildings are currently used by CBC Coating, Inc. The east end of the one to the right is the approximate location of the M&N 2-stall roundhouse and turntable. Photograph by Tom Bruss. 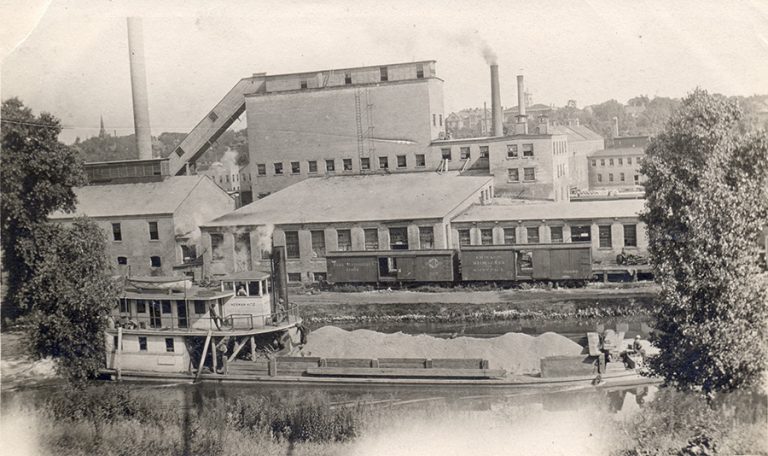 Riverside Paper was a customer on the Appleton Branch in ‘the Flats’ at Appleton, Wis. This view is looking north from the aptly named Canal St. (now the Newberry Trail) circa 1915. The box car on the left is Pere Marquette PM 41064, the one on the right is Milwaukee Road (MILW) CM&StP 66886. The sternwheeler Herman Hitz traverses the canal in the foreground. The paper mill was built by the Riverside Fibre & Paper Co. circa 1895. The Chicago & North Western (C&NW) rails ran along the north side of the mill, it was probably served by both railroads. It closed in 2005 or 2006. The mill complex was eventually razed and some bland apartment buildings, the Landing at Eagle Flats and Riverwalk Place, were built on the site in 2011-12. Photograph courtesy of the Neenah Historical Society.