Originally the Whiting & Gilbert Paper Co., the mill was built on the site of an abandoned dry dock along the Fox River Navigation Canal at Menasha, Wis., circa 1881 (some references state 1882, others state 1884). The company was the partnership of George A. Whiting and Theodore and William M. Gilbert. It became the George A. Whiting Paper Mill in 1886, after he bought out the Gilbert brothers (They then formed a partnership with their father, William Gilbert, Sr., and another brother to establish the Gilbert Paper Co.). Most of the current facility was built after a devastating fire and explosion on 24 August 1888. The name was changed to George A. Whiting Paper Co. in 1911. In March of 2014, the 5th generation of the Whiting family sold the company to Tom Danz, who had joined the company in 1999; the name was changed to Whiting Paper Co. The paper machines were shut down two years later, after 134 years of providing quality paper products and living-wage jobs. The facility has been idle ever since.

The George A. Whiting Airport, at the intersection of Airport Rd. and Appleton Rd. in Menasha, Wis., was named in his honor because he donated $5,000 to construct the facility ca. the 1920s. Reportedly, it was “Wisconsin’s finest and busiest airport” in the 1930s. When the government decreed that there could be only one airmail port per county, they chose the airfield at Oshkosh, Wis., and the George A. Whiting Airport soon faded into history, except for the hanger, currently home to Kitz & Pfeil Ace Hardware.

C&NW 124, WC 24, and M&N 2 pose in front of the Whiting & Gilbert Paper Co. mill at Menasha, Wis., circa 1882 or 1885. Whiting Paper was a M&N customer on the Menasha Branch. The facility was also served by the Chicago & North Western (C&NW) and Wisconsin Central (WC). Photograph courtesy of the Neenah Historical Society. 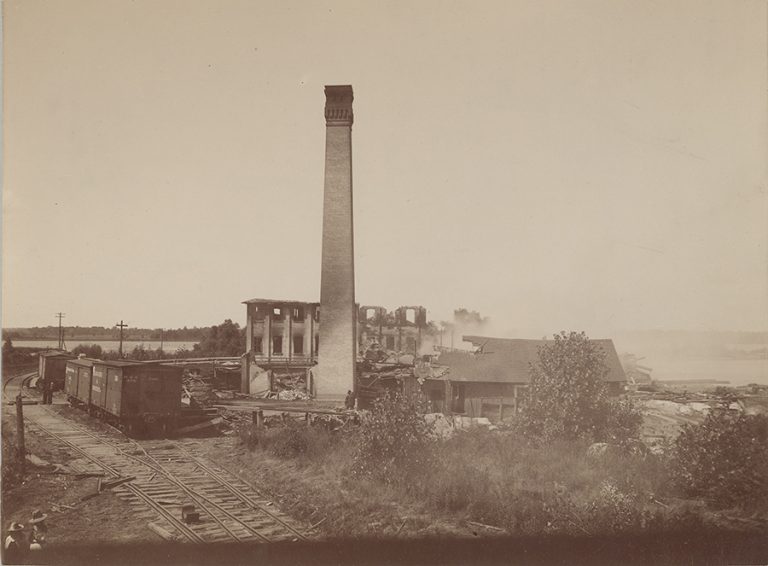 The smoldering ruins of the George A. Whiting Paper mill at Menasha, Wis., shortly after the devastating explosion and fire on 24 August 1888. Eighteen spectators were killed, seven were severely injured, and numerous others slightly injured by flying iron, brick, and wood debris from the explosion. One of those killed was a M&N employee, Frank Schiffer. M&N 336 is the nearest of the boxcars standing to the left. Whiting Paper was a M&N customer on the Menasha Branch. The facility was also served by the Chicago & North Western (C&NW) and Wisconsin Central (WC). Photograph courtesy of the Oshkosh Public Museum. 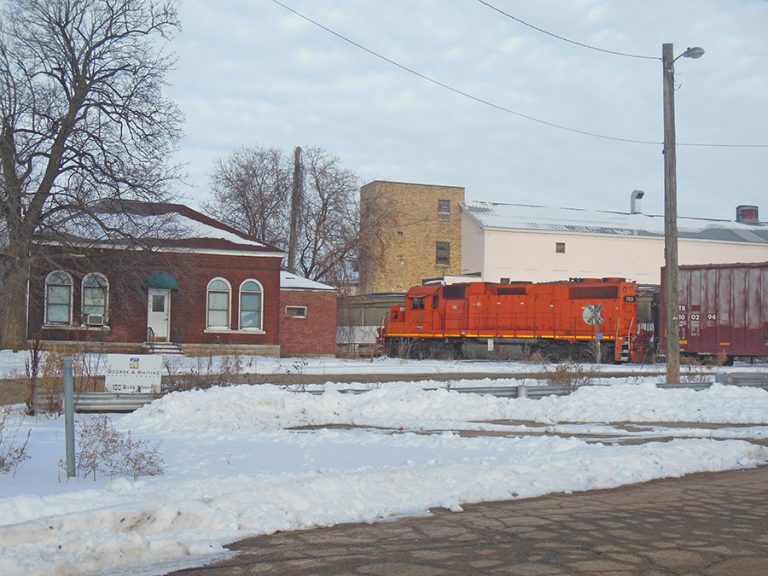