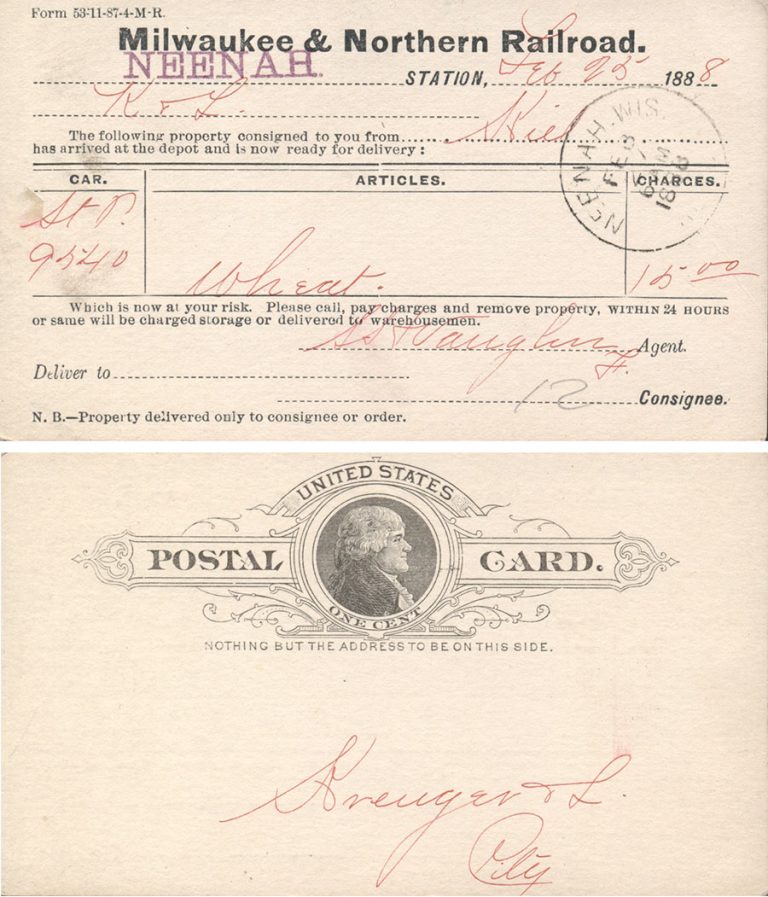 In December of 2021, we were thrilled to find, and purchase, this postcard for our archives. This postcard had been filled out by Agent S. H. Vaughn at the M&N Neenah depot (our depot) on 25 February 1888. It was mailed to the Krueger & Lachmann flour mill in Neenah to inform them that their shipment of wheat had arrived from Kiel, Wis. Postcard from MNRHS archives.

In 1867, Andreas Henrike Frederick Krueger and Carl Stridde formed the partnership of Krueger & Stridde. They commenced construction of a flour mill, or grist mill, on the power canal, or mill race, at Neenah, Wis., that year. The mill was completed in 1868 and they called it the Island City Mill(s) (a.k.a. Island City Flouring Mill(s) or Island City Roller Mill(s)). This was the eighth of at least twelve flour mills constructed at Neenah, Wis.

Krueger’s name was commonly anglicized as Andrew Henry Frederick Krueger. He was commonly known as A. H. F. Krueger or Fred Krueger. Stridde’s surname was often misspelled Striddie or Striddle on maps and in periodicals and other historical references.

Their mill was erected on Water Street near the intersection with Cedar Street. Water St., not to be confused with the North Water St. on Doty Island, is no longer extant. While the pavement still physically exists, it is no longer a public street. Cedar St. was renamed N. Commercial St. sometime between 1895 and 1900. 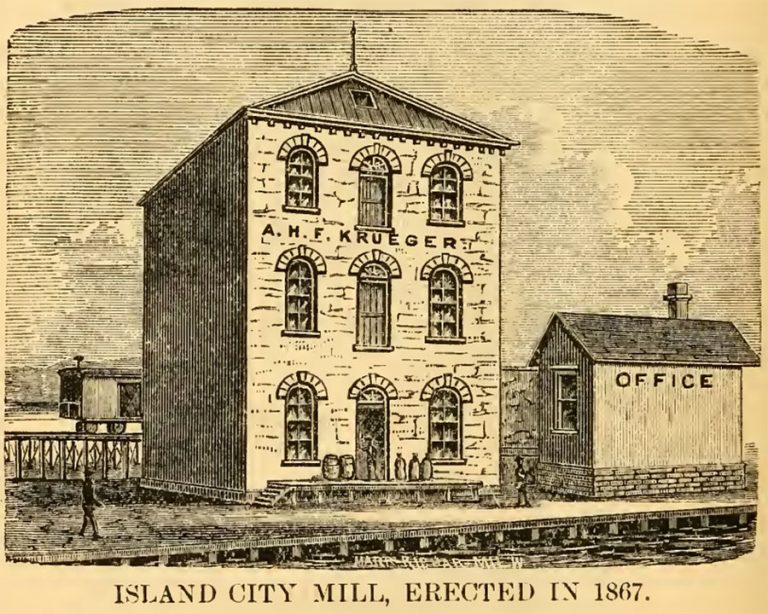 An engraving of the A. H. F. Krueger flour mill from History of Neenah…, 1878. Image courtesy of the Neenah Public Library.

When Carl Stridde passed away on 23 June 1877, his wife, Charlotte, assumed ownership of his half of the company, but did not actively participate in its operation. The firm was known as Krueger & Sons for a while, and Fred eventually bought out Mrs. Stridde’s half. Circa 1880, Fred formed a partnership with John R. Davis, and the company was briefly known as Krueger & Davis. The company was re-named Krueger & Lachmann circa 1883 (some references state 1885). Edmund J. Lachmann had been hired as a bookkeeper circa 1880, and had married Fred’s daughter Dora in 1882.

Lachmann’s name was commonly misspelled Lachman or Larchman(n) on maps and in periodicals and other historical references.

At some point between 1887 and 1891, the company purchased the adjoining Wieckert’s Planing Mill and converted it to a flour mill. The original, stone, flour mill became known as Mill A, the “new” framed flour mill became Mill B.

Wieckert’s old facility dates to at least 1872, but was probably erected in the 1850s or 1860s by C. O. Page & Brother. Wieckert vacated their old mill after constructing a new planing mill on the opposite side of the power canal between 1887 and 1891. Wieckert’s name was often misspelled Weickert or Wickert on maps and in periodicals and other historical references. 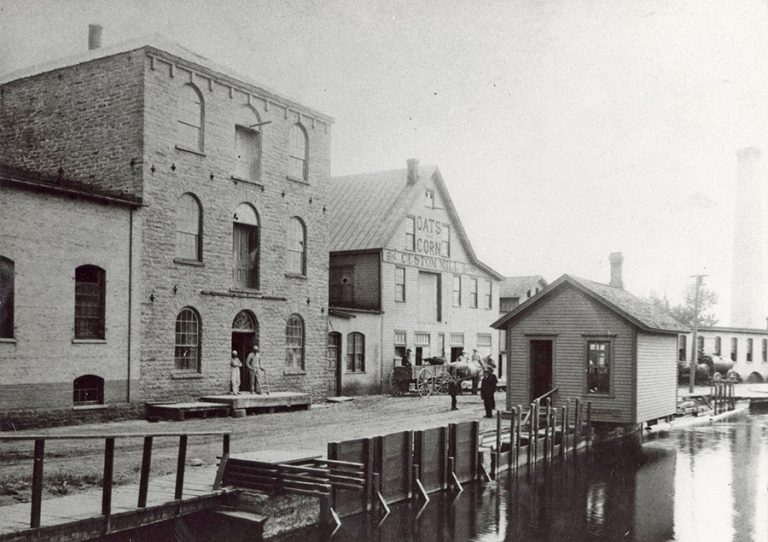 Front view of the Krueger & Lachmann Milling Co., reportedly captured on 30 May 1891. The building partially visible on the far left is a Kimberly-Clark warehouse. Mill A is the 3-story stone building. The frame structure next to that is Mill B. The 1-story cream-colored brick building partially visible to the far right is Neenah Paper’s pulp house. This view is looking northeast from Cedar St. (now Commercial St.). This is the power canal, or mill race, side of the facility. Water St. passes in front of all of these industries. Photograph courtesy of the Neenah Public Library.

This portion of the Neenah Paper Co. mill and office building at Neenah, Wis., as seen on 22 January 2022, were erected upon the former site of the Krueger & Lachmann Milling Co. You can see that the flume which passed under the flour mill still passes under the office building. This view attempts to replicate the same perspective as the photograph at left. A few small trees, just out-of-frame to the left, prevent that exact view. This view is looking northeast from N. Commercial St., originally Cedar St. Photograph by Tom Bruss.

The company was incorporated as the Krueger & Lachmann Milling Co. in 1893.

In April of 1894, Mill A “was rebuilt from basement up” by the Willford & Northway Manufacturing Co., Minneapolis, Minn., according to The Weekly Northwestern Miller on 24 August 1894. At the time, Henry Krueger, a nephew of the founder, was the head miller. Mill A was used to grind wheat exclusively, Mill B was used to grind corn, rye, and buckwheat. By this time, there was only one other flour mill remaining in Neenah, operated by Wulff, Clausen & Co. 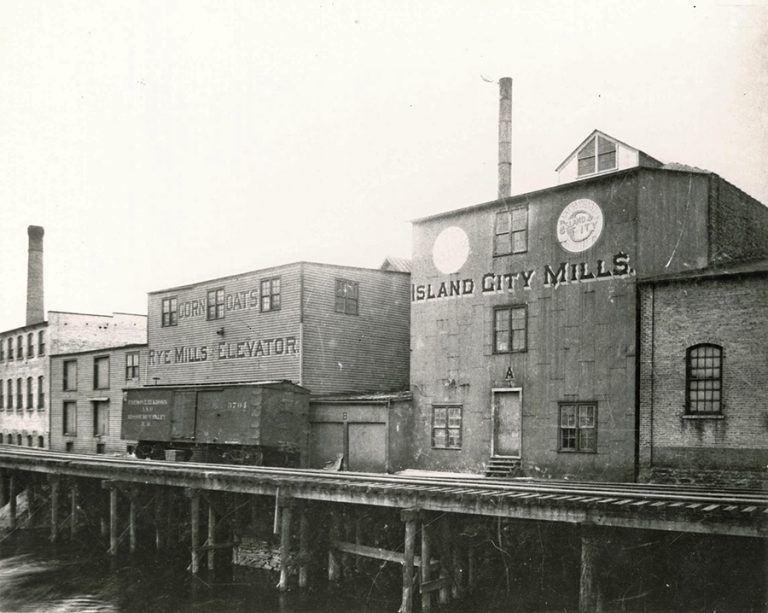 Rear view of the Krueger & Lachmann Milling Co., captured ca. 1895, when this arrangement of buildings was depicted on the Sanborn maps. The cream-colored brick building at the far left is a recent addition to Neenah Paper. The frame structure behind the boxcar is Mill B. The building with the Island City Mills sign is Mill A. The building partially visible on the far right is a Kimberly-Clark warehouse. This view is looking southeast from Cedar St. (now Commercial St.). This is the river side of the facility. Photograph courtesy of the Neenah Public Library. 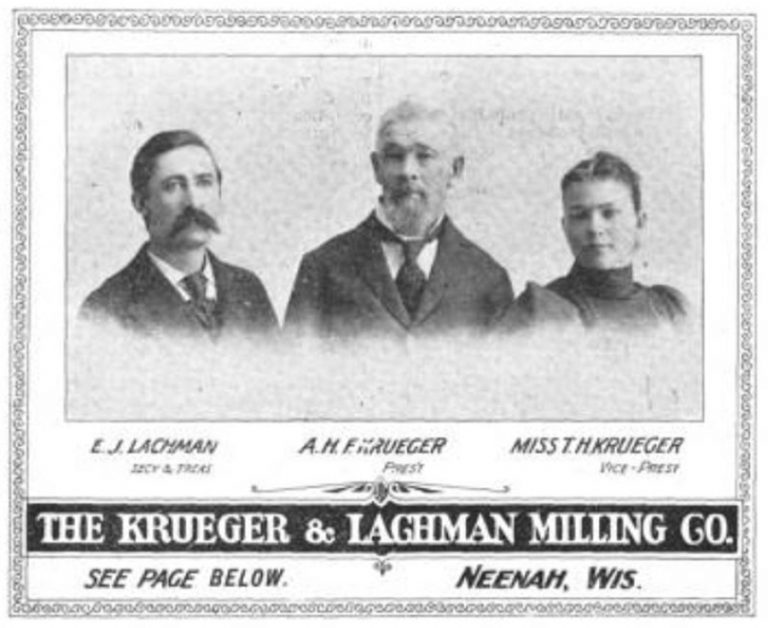 An advertisement for the Krueger & Lachmann Milling Co. from The Weekly Northwestern Miller, 26 June 1912.

The Neenah Paper Co. purchased the Krueger & Lachman Milling Co. facility in July of 1918. However, according to Paper on 31 July 1918, “The flour milling machinery was not included in the transaction, and delivery of the property will not be completed until the milling concern has worked up its stock on hand, which may take a few months to come.”

A pair of fine books, A History of Neenah, 1958, and Images of America – Neenah, 2014, both claim that the facility suffered a fire in 1911 and never resumed operations. As can be read above and below, those claims are false.

After exhausting their stock and fulfilling the last of their orders, the last flour mill in Neenah (once known as ‘the Flour City’) shut down for good on 1 January 1919. The entire existence of the company was summarized, all too briefly, in American Miller on 1 February 1919: “The Krueger & Lachmann Milling Company of Neenah, Wis., retired from business on January 1. The company was one of the best known flour and feed manufacturers in the Northwest. It was established in 1868 by A. F. H. Krueger and Carl Stridde. In 1878 John R. Davis became a partner in the concern; shortly afterwards Krueger’s son, Fred, and E. J. Lachmann acquired controlling interest in the firm and became active managers of the company. The business was incorporated in 1894 as Krueger & Lachmann Milling Company with E. J. Lachmann in charge. The mill site and other property was purchased by the Neenah Paper Company. Owners expect to build an office building upon the site.”

In late 1925 or early 1926, the Krueger & Lachmann Milling Co. facility (as well as a circa 1887 Kimberly-Clark warehouse) were demolished to make room for an addition to the Neenah Paper Co. mill and their new office building.

A paragraph in The Paper Industry, May 1926, stated: “Construction has started on the new office building of the Neenah Paper Co., of Neenah. It will be a beautiful two-story fireproof building erected on the site of an historic stone flour mill which has been dismantled…”

The December 1926 issue of The Paper Industry continued: “The new office building of the Neenah Paper Company, of Neenah, has been completed, as far as the exterior work is concerned, and work is now being done on the interior. The building is of Stevens Point stone and Colonial in design. The landscape work will be done in the spring. The first floor will be used for main offices and the second floor for additional offices and mill laboratory.”

In January 1927, The Paper Industry announced: “The new office building of the Neenah Paper Co., Neenah, was formally opened on Dec. 1, with a large number of out-of-town guests, prominent in the paper industry, present. A banquet was served in the Valley Inn, a Neenah hotel.” 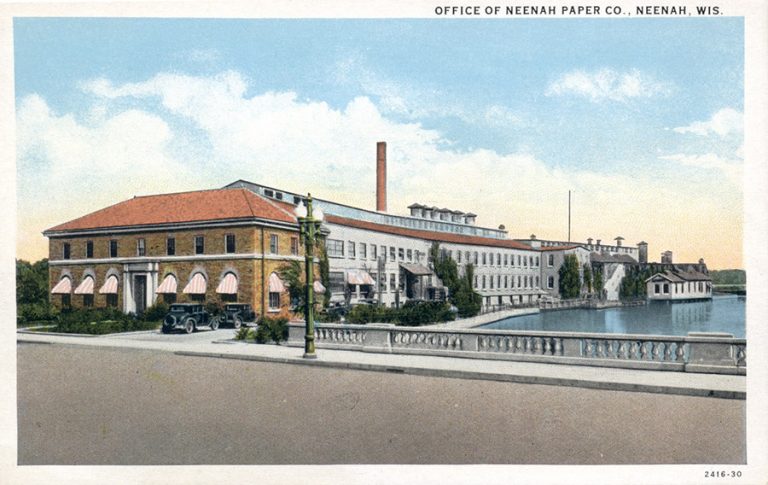 A circa 1930 postcard depicts an addition to the Neenah Paper Co. mill and their new office building, erected upon the former site of the Krueger & Lachmann Milling Co. The Neenah Public Library possesses a copy of the original photograph which was used to create this colorized postcard. Postcard from the collection of Tom Bruss.

According to the fantastic book, Memories of Doty Island…, 1999, “The stone mill was then built into the Neenah Paper Company factory. The outline of the Island City Mill, makers of Gilt Edge Flour, can still be seen to this day along the south wall of the Neenah Paper Co.” Sadly, as can be read and seen above, that book’s claim is erroneous.